Roger (unseen, possibly unsightly or shy or just very busy cooking an amazing meal) and Sue Jones have got the most amazing establishment.Ã‚Â I was won over when I turned up to see boxes of Bollinger waiting to be taken in.Ã‚Â They were so lucky I am not drinking at the moment.Ã‚Â So am I to be honest, that could have been messy.Ã‚Â Apparently Roger is quite an expert on the wine front winning awards and writing for The Decanter.Ã‚Â Certainly a lot of wine was consumed over the course of the day (not by me) and it was declared excellent.

I have trying to come to theharrowatlittlebedwyn.com for ages, not least because we don’t have that many Michelin starred places near us.Ã‚Â So thank you Mr and Mrs Quinton-Smith for such a fantastic lunch.Ã‚Â We started at 1 and finished at 5.30 and enjoyed every minute.Ã‚Â I was designated driver, no problem although a quick tang of regret when I saw the boxes of Bollinger in the lobby waiting to go in.

We were so lucky that it was a fabulous sunny day and we took up our table in the garden, all the other diners were inside and missed an opportunity although as I think about it it was probably a very wise decision on their part as we werent too quiet, indeed rowdy and rollicking is a better description.Ã‚Â But how nice that we could have such fun in a place that served the amazing food that most people are deferential to.Ã‚Â Mr and Mrs QS are great company and Sue was utterly delightful as front of house, the welcome was superb and I intend to go back to interview her for Kennet Radio 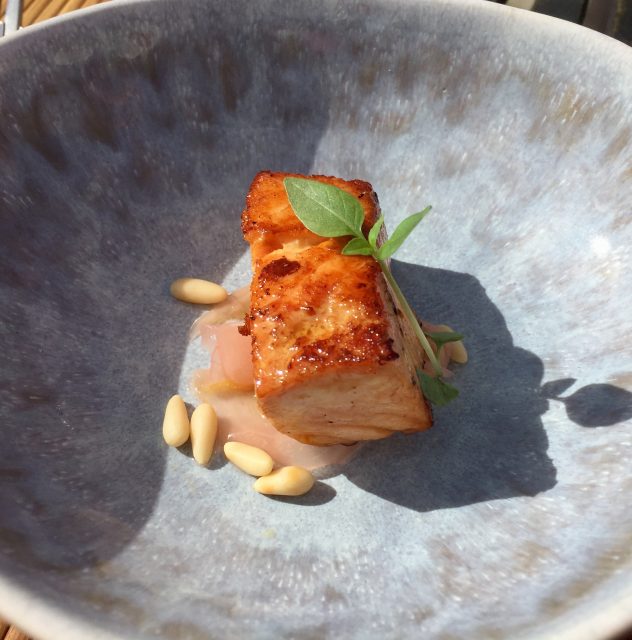 ooh this was so exciting, what is in the tin, is it John West Tuna or spam?

Nope it is the freshest of fresh octopus, chorizo and sweet pepper with grilled sourdough bread.Ã‚Â I loved the cuteness of the presentation, the bread was very lightly toasted and delicious and the octopus was superb

Ok I probably didnt need to do a picture of the yuzu and wasabi but look how pretty it is.Ã‚Â It is used with ……

sashimi of yellow tuna, scallop and langoustine, green chilli, coriander and pistachio pesto.Ã‚Â I am getting bored of saying how fresh it is, just accept it is unless I say otherwise which I wont.Ã‚Â This had a stunning texture as well as flavour although I didnt put too much wasabi on it as the flavours were so perfect as they were.Ã‚Â The pistachio pesto was a clever touch.Ã‚Â I also love the crockery the food was served on, as an ex potter it is one of the things I notice and it was selected well.Ã‚Â Part of the whole experience that we sometimes forget.

Oh my, the maddest mixture at first sight of carpaccio venison, foie gras, truffles and the secret ingredient of PX1927 Caramel which added the most incredible flavour that I wouldnt have guessed would have worked and still cant believe it did even though I loved it so much I used my finger to scrape out the bowl.Ã‚Â The foie gras was really good quality and the macoron on top was brilliant.

OK at this point I have to say that at every course we were saying that this was the best course ever.Ã‚Â However what can I say, either we are incredibly forgetful or Roger just keeps producing better and better food starting with brilliant and improving from there!Ã‚Â (Still havent seen him so lets go with the fact that he is very busy rather than being unable to be seen in public).Ã‚Â This was lobster in the best form I have ever had and on a par with fresh from the sea in Hong Kong.Ã‚Â Compare this with the miserable offering I had at Forburys (see another review somewhere else, must get round to organising blog, note to self).Ã‚Â It is tempura lobster with Asian Spices and is again outstanding. The tempura was incredibly light and crispy, barely coating the succulent lobster and tempered with the tasty but not overwhelming sauce.

Right now i know I said the other courses were the best but really this is the best so far, turbot, mushrooms and cep and chicken cream.Ã‚Â Again beautifully cooked and with a sauce that I could have eaten on its own.Ã‚Â This would absolutely been a bowl licker if I hadn’t been with company.Ã‚Â Please make it for me to take home Roger and Sue.

Hurrah a dish that I cant say is the best so far because I didnt have it.Ã‚Â The chaps had this grouse with parsnip puree and I didnt mind at all as I am a bit weedy with strong game but the guys inhaled it.

This was possibly the best dish so far, lamb with a little lamb burger, mint couscous (inspired) and IOW tomatoes.Ã‚Â Loved it

Their signature boiled egg and soldier, a jokey item

Works though, try it to find out what it is

I could hardly do this justice, as you know I am not a pudding person but did manage to eat this one, a berry souffle, sorbetÃ‚Â and again looking delightful and tasting so good I did actually eat it all.

The lovely Sue (we never did see Roger so have no picture of him, a strange mystery I think) and the gorgeous Caroline along with a very suspicious looking husband (mine not hers)

Sometimes you go out to eat and think ‘bugger, that was a waste’ as either it was dull or you could have cooked it yourself.Ã‚Â Not here, every course was a delight.Ã‚Â Would I go back?Ã‚Â Try and stop me!!Ã‚Â Firstly for an interview, no let me be honest, for the food and I will do the interview regardless.Ã‚Â These are really lovely welcoming people, a beautiful setting and a mysterious chef.Ã‚Â What is not to like.Ã‚Â Thank you Mr and Mrs QS and The Harrow x